The Beginnings of Christ UMC

History of Methodists in Utah

The Methodists began serving the populations of Utah in 1826 through the work of Jedediah Smith, a lay preacher, fur trapper and explorer.  He was called the 'Bible totin' Methodist explorer.  By 1869 the foundation had been laid by many Methodists in Utah for a long lasting ministry. The Methodists became known for bringing education and schools to the Beehive state, working with immigrants and holding tent revivals. The Women's Home Missionary Society addressed a number of challenging issues of the time.

In 1952 the congregation purchased the Crest Theater, 2021 East 2700 South, where worship services and Sunday school classes were held. Next 1.6 acres of land on 3300 South were purchased and the name was changed to Christ Methodist Church.

Construction of the first unit of the building was begun in May of 1953. As the congregation grew in size, the building was expanded to include classrooms, offices, a chapel, a lounge and a kitchen, which were completed in 1963. Ground was broken on the property in 1965 for construction of a new sanctuary. The first worship service was held there in February, 1966.

​In 1968 the church's name was again modified to its current one, Christ United Methodist Church, when the greater Methodist Church merged with the Church of Evangelical United Brethren. In 2005 the building was expanded again, adding a gym and classrooms, which are used by congregation members and members of the community, such as Boy and Girl Scouts, and the Canyon Rim Community Council. The Inn, located in the basement, makes it possible for the Family Promise program to house its guests for extended stays.

Christ UMC supports recycling, reducing the use of non-recyclable materials and reduced waste in an effort to be good stewards of the earth which is a principle of United Methodists.

In 2009 it was determined that a priority should be placed on adding renewable energy to the building. In 2010 there were 99 solar panels installed.

A renewable energy steering committee applied for a grant from Rocky Mountain Power to place a solar photovoltaic system on church property to supplement the church’s energy requirements.  More than $52,000 was contributed to match a $60,000 grant from Rocky Mountain Power's Blue Sky program to fund the project that was dedicated September 7, 2010.

On the CUMC recognition wall, are two commemorative and memorial panels.  One panel shows our appreciation for the Blue Sky Grant of Rocky Mountain Power and the second panel lists the 106 individuals who contributed to the project. 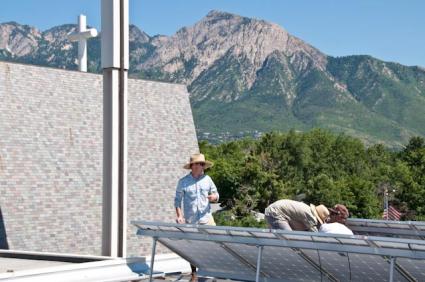 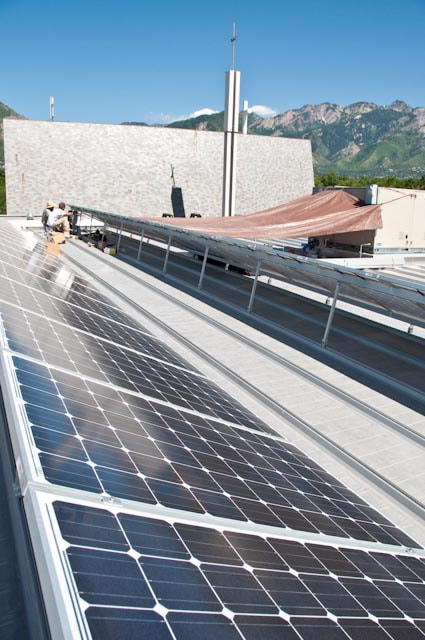